A General Guide to Cooking With Seafood 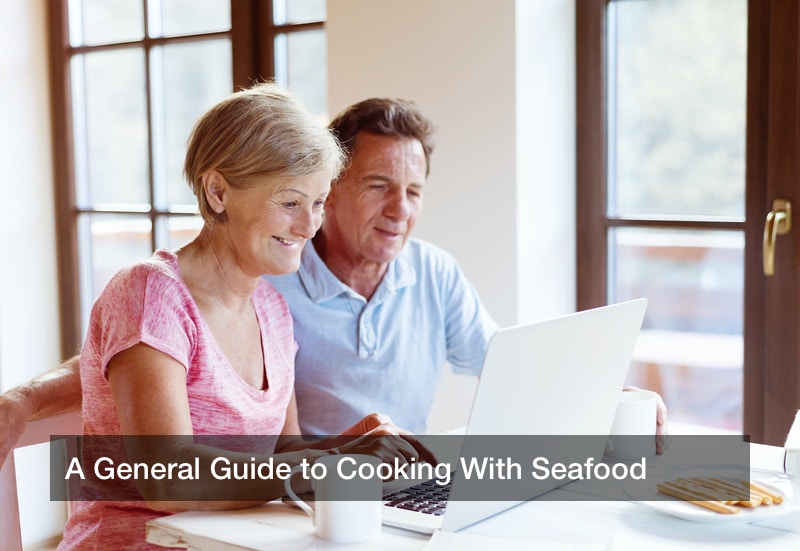 Seafood is enjoyed by many, but can be intimidating to cook. As a result, many people only enjoy fish, bivalves (like clams and mussels), and crustaceans (like crab, shrimp, and lobster) at seafood restaurants.

However, cooking seafood at home can provide you with many benefits including:

Just as importantly, cooking seafood is often fairly easy. Fish can be cooked using almost any technique, including baking, sauteing, deep-frying, and poaching. Likewise, seafood can be adapted to almost any recipe, from dips and appetizers to soups, salads, and main courses.

Finally, seafood is very healthy. It is a low-fat source of protein and is rich in minerals like iodine, magnesium, potassium, zinc, and iron. Moreover, some fish, such as salmon, mackerel, and sardines, are high in omega-3 fatty acids. Omega-3 fatty acids are believed to have many health benefits, including:

As a result, people who eat foods high in omega-3 fatty acids have a much lower risk of heart attack and stroke. In fact, nearly 90% of consumers say one of the main reasons they eat seafood is health.

With all these benefits, learning how to cook fish can be essential to a long and healthy life. Here is an overview of cooking with seafood:

There are many considerations that go into picking the right species. First and foremost, you should pick seafood that matches your tastes. Many people find oily fish, like mackerel, sardines, and anchovies, too fishy tasting. For people sensitive to a fishy taste or aroma might prefer tilapia, haddock, or trout. For other consumers, mild fish may seem bland and they may prefer species that have more character, such as salmon.

Similarly, you might want to choose a species based on the recipe. Neutral tasting and smelling fish, like catfish, are often used in recipes with stronger flavors. For example, blackened catfish works because catfish is relatively mild and carries the seasoning well. Similarly, deep-fried cod is the standard seafood used in “fish and chips” because it has a neutral flavor.

Other dishes, such as sushi, might call for more exotic seafood, such as octopus, squid, or sea urchin. These are selected for their unique texture and flavor that comes through even when uncooked or lightly cooked.

Picking the right species also includes making sustainable choices. Over-harvesting has caused some forms of sea life to face extinction. Bluefin tuna, orange roughy, and swordfish populations have neared collapse due to over-harvesting that exceeded their ability to naturally replace those caught for consumption.

To meet world demand, many forms of seafood are now farmed. Shrimp, mussels, Atlantic salmon, trout, catfish, and tilapia are raised in farms and can help fish-lovers consume seafood without impacting natural stocks. However, farmed seafood does have its drawbacks. Seafood raised in pens can be ravaged by disease or contaminated by chemicals, pesticides, or waste that gets washed into the pens.

If your hobbies include fishing, you can select your species based on your location. Alaska, for example, is known for salmon and halibut while Hawaii is known for mahi mahi and ono. You can land local favorites by fueling up your boat and heading to these areas. However, be conscious of carrying invasive species, such as zebra mussels, from area to area. You can minimize the risk of unwanted stowaways with thorough boat detailing and washing between trips.

The key to safety is to select seafood that is either frozen or is no more than a few days old. Frozen seafood is almost always safe because the seafood is frozen almost immediately after being harvested. In addition to preserving the meat before microorganisms are able to multiply, the cold can also kill many of the microorganisms that remain.

However, frozen seafood often has a texture and flavor that is undesirable, particularly when compared to fresh seafood. If you live near a major port, such as California or New York ports, it may be easy to obtain fresh seafood right off the boat. If you do not live near a coastline, it may be more difficult to identify fresh seafood from old seafood. Often you will need to use a few different senses to detect old seafood:

Crab, lobster, oysters, clams, and mussels can also be purchased frozen, canned, or bottled. Canned and bottled seafood is often processed immediately after harvesting and, thus, is usually safe unless the can or bottle is damaged. Frozen crab and lobster should be examined carefully using smell, sight, and touch as described above so that you can avoid any unscrupulous seafood sellers who might have frozen them after they had already gone bad.

Once your seafood hits your kitchen, the clock is ticking. Seafood is very perishable and does not last longer than a few days in the refrigerator. You should either freeze or cook your seafood with a day or two after purchase.

If you plan to store your seafood before cooking it, make sure it stays dry and cold. Either place the seafood in the coldest part of your refrigerator or place it into a plastic container with sealed ice packs.

If you need to store your seafood for more than two days, you can lay it out on a sheet pan or rack to freeze before packaging the seafood in sealed plastic bags. Remember that any breach in the plastic bag may lead to freezer burn (a phenomena where the meat dries out in the freezer) and a smelly freezer, so make sure the bags are sealed completely.

Live seafood, such as bivalves and crustaceans, can be kept in the refrigerator in a dry pan covered with damp paper towels. Bivalves, such as clams and mussels may be stored up to three days, while crab and lobster should be cooked the day they are purchased.

Cleaning seafood is generally a matter of common sense. Scrub the shells of any shellfish that are to be cooked in their shells. Barnacles, moss, and microorganisms can cling to the shells after they are harvested.

Cross-contamination is just as important to avoid with seafood as with red meat and poultry. Cross-contamination occurs when the raw seafood, its raw drippings, or anything that touched the raw seafood or drippings come into contact with prepared food or food that will not be cooked. For example, cutting vegetables for a salad using the same knife that was used to fillet raw seafood can result in a transfer of bacteria or bacterial waste products from the seafood to the salad.

Seafood can provide a blank canvas. Most seafood can take any seasoning from any cuisine. For example, for the best Italian dishes, you can cook seafood in white wine with diced tomato and olives for a simple yet tasty dish. For a more robust flavor, you can sprinkle some barbecue seasoning or taco seasoning on fillets before grilling them.

In other situations, your recipe may call for little or no seasoning. For example, seafood used to prepare sushi may require just a dab of Japanese horseradish (wasabi) before placing it onto a block of rice.

When choosing seasoning for fish, take care not to overwhelm its natural taste. Although lobster can absorb and carry strong flavors, many people like their lobster prepared simply — usually just with melted butter — so the naturally rich, yet delicate and sweet, flavor of the lobster can come through.

Cooking is a bit of a misnomer when it comes to seafood. Some seafood is both delicious and safe when eaten raw. Sashimi and sushi are Japanese dishes in which raw seafood is eaten alone or atop rice. Although saltwater seafood is not entirely devoid of harmful microorganisms, they are safer than freshwater seafood. Moreover, seafood intended to be consumed raw is often frozen before preparation to kill any microorganisms.

Another dish, ceviche, is prepared by marinating raw seafood in citric acid from lime juice. The acid causes the protein in the seafood to tighten to resemble the texture of cooked seafood. The acid also kills microorganisms on the seafood.

If you choose to cook your seafood, make sure it reaches at least 145 degrees Fahrenheit in the center. This will be hot enough to kill any microorganisms. If you do not have a kitchen thermometer, cook the seafood until it is opaque (rather than translucent) and flaky.

For seafood lovers who live with others in dormitories or senior living communities, the smell of seafood cooking can often pervade the entire residence. Some hints to reducing the seafood odor include:

Presentation is often as important as flavor. A whole fish on a serving platter can be a spectacle that will be remembered forever. However, a whole fish can be difficult to portion. Similarly, a kettle full of boiled seafood, potatoes, and corn in the nature of a seafood boil can be a thing of beauty, but also create a huge mess. While you do not need an entire basement remodeling project to serve seafood, planning ahead by providing a proper serving surface and lobster bibs can minimize the mess.

For a romantic dinner, avoid bright LED lighting and go for a candlelit lobster dinner. Service may be as simple as some melted butter and lemon wedges to accompany steamed lobster tails.

After the meal, seafood has a reputation for lingering odors. There are a few tried and true techniques for reducing or eliminating the seafood odors.

When cleaning your cookware, scrub thoroughly with baking soda. Baking soda will absorb the seafood smell from pans. If your pans smell of seafood, you will smell seafood every time you use them, even if you are cooking bacon and eggs.

Cutting boards can retain the smell of seafood. One option for eliminating the smell can be to use vinegar or bleach. Another option is to clean it with dish soap, then rub the surface with sliced lemon. The same lemon trick can be used to remove any seafood odors from your sink.

Cooking seafood can be rewarding and healthy. Just remember to pick the right species for your recipe, find fresh seafood, store and handle safely, season without overwhelming, and cook your seafood (or not).